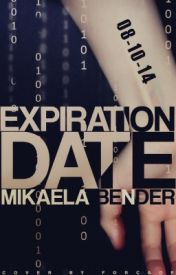 Me: Mikeaela, firstly, thank you for taking time out of your busy schedule. It’s very much appreciated. I had Jessica Woodcock recently contact me suggesting I interview you in my Author Spotlight series, she is a huge fan of yours and is really enjoying Expiration. Having started to read it, I can see why.

Mikeaela: I’m so honored that you asked me! Also thank you, Jessica, for giving me that shout out and thanks for reading Expiration Date! Okay, I’ll try to stop with the exclamation points.

Who is Mikaela Bender? – Tell us a little about yourself.

I’m a senior in high school who has been homeschooled my whole life. I haven’t been writing for too long. I started when I was fourteen, so I absolutely give God all the credit for any blessing that happens to me with writing. I’ve always been the shy girl, the quiet one, the one who speaks up only every so often. That is until you get to know me and then I won’t shut up. What I love about Wattpad is that on there, I’m not the shy, introverted girl I’ve always been. I can be bolder and braver, and having readers gives me the confidence that people want to hear what I have to say.

Well like I said, I was fourteen. A few months before I started writing I had to write a short story for school, but I don’t consider that to be when I started. I started when the motivation for me to write was me wanting to. Somehow I got it in my head that the first thing I wanted to write was a novel. But, hey, I did it and I was hooked.

What motivates me is writing scenes that I have been planning for a long time. It may still be four chapters before that next part I’ve been dying to write, but it’s there and I just have to keep typing. Also my readers on Wattpad. Knowing there are people who want to read the next chapter is what encourages me to write a new chapter each week

What is it about the Science Fiction genre that fascinates you the most? Where do you get your inspiration?

I think it’s the possibilities. With fantasy it can be hard when trying to establish rules for magic and being sure to follow social customs for the time period you’re writing about. With science fiction, you don’t have to be a scientist to write it. You can make the laws of science, you can bend them and break them, and all because of that word fiction. I also love reading young adult alien stories. My favorite is the Cage by Megan Shepherd. As far as motivation, I draw it from other books, movies, TV shows, and they don’t specifically have to be science fiction.

Expiration Date, a Wattpad featured novel and sitting at #2 in Science Fiction, has a very chilling premise — that we know from the day we are born when we are going to die. Where did the idea for the story come from?

I really wanted to write a story on Wattpad. I also wanted to get my best friend to write. So we looked up prompts on one of my boards on Pinterest and found a prompt close to what you wrote the premise as. My friend said that was her favorite. So I asked her questions like how old the character should be and if she liked this name or that. A few minutes later, I started writing and would ask her what she thought. My goal in her writing it too never happened though. I never thought that a year and a half later I would have put so much of me into Expiration Date. I had no idea where I was going to go with that prompt.

Prompts are interesting because they’re usually one sentence, but every person takes a story on a different path. And the path I’ve been on with it has been a blast to write. I never expected to feel so connected with each of the characters. I don’t want the story to end because I don’t want to say goodbye to them.

What long term plans do you have for Expiration Date? Should we expect to see it on bookstore shelves in the future?

I may or may not have plans for more books in the series. Expiration Date is combined with its sequel Expired as a duology on Wattpad. They can be found in the same book on the website. The stories are so entwined that they’re more like one big book. I had to split them up though if I was ever going to publish them. That said, I do hope to publish them one day. My goal would be to traditionally publish them. If that does happen, I would love to be able to leave them up on Wattpad in their unpublished versions.
Currently, you have two other stories you are posting to Wattpad – Insurrection & My Best Friend’s Werewolf. Do you find it difficult to write multiple stories at once? How do you prepare yourself to focus on an individual story at any given time, considering ideas for your other stories would be clamouring to get out?
Oh my goodness, yes! It’s difficult! I had made a promise to myself not to start another novel until I finished the first draft of my current project. But after I reached the end of the first draft for Expiration Date and before I started the sequel, I really wanted to write more on Wattpad. So I continued a short story that I had posted, Insurrection, and around the same time I started a werewolf book, My Best Friend’s Werewolf, because I was eager to write one. I then started the sequel to Expired and that became my main focus, because I had the most readers on it. The hardest thing about writing multiple books is time. To prepare myself to focus on a story, I like to think and to partly act out the scene before writing it so I feel pumped to express it on the page (or my iPhone).

Do you have any strange writing habits (like having to wear a particular outfit when writing or circling your desk three times before sitting down to write)?

I don’t have any strange writing habits before starting to write, which is a real blessing because if I did, my OCD would get out of control and I would probably never get around to writing. I do have a habit while writing though. It’s not a full-fledged habit, but when I’m tired I’ll start writing about sleep and how good it sounds to my characters. That’s when I realize I need to go to bed.

I’ve been told that writing online won’t allow me to grow as a writer, but it has. It’s given me confidence in my writing. Since starting to write on Wattpad, I haven’t had as much time to read the books on my bookshelf which I regret, because every time I read a published and polished book, my writing improves so much. Ever since I started writing, I was always worried that my age would inhibit me from being accepted as a writer, and that my writing wouldn’t matter. But with Wattpad, people don’t see my age. They simply judge me based on my writing. I can see the difference and growth between the first chapters of Expiration Date and the latest chapters of Expired. Though now that I’ve rewritten the first twenty-eight chapters, I’ve really seen how I’ve grown. Reaching one thousand words for a chapter used to be extremely rare, now it’s not passing one thousand words that’s rare.

Wattpad also has given me a following which will really help if I ever publish.

This is mainly for Wattpad; not everyone is going to like what you decide to do with your story, but what you have to remember is that unless you’re being paid, you are writing for yourself and are choosing to share your story. I’m not saying don’t listen to constructive criticism, but remember to stay true to your story.

I know you have probably heard to write every single day. I’m going to tell you not to. Let me explain. Write every day that you want to and even if it’s only a tiny bit. But if there’s a day that you really do not want to write, don’t. Don’t kill the joy of writing by making it a chore.

Now, apart from creating the term Authorgirling, is there any other interesting fact we might not know about you?

You made me laugh. I actually want to be a publisher. I want to go to work every day surrounded by stories. I want to help tell those stories. This is kind of random (I had to dig down deep). I was an extra in the movie Letters to God, so I had the chance to spend time on movie sets. That’s the extent of my interestingness.

Thank you again for having me! To everyone reading, I hope you found something in here that speaks to you. If you haven’t been on Wattpad, give it a look.