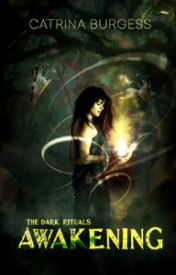 I was very fortunate this week to interview the queen of the board game Stratego, and author of the Dark Rituals series – Catrina Burgess. Awakening, the first in the series was recently rated at #3 on Amazon in the Teen Horror category. Read on to find out more..

Who is Catrina Burgess? – Tell us a little about yourself.

How did Awakening and the Dark Rituals Series come about?

I came down with Chronic Fatigue and was very sick. I was too sick to write for the first three years I had CF. But every year I got a little better. When I finally could write again, I started working on a story about a girl who stumbles into a magic shop desperate to gain the Dark Arts. Colina’s story was a lifeline for me. When you have CF, you have a problem sleeping, and there were many nights I was up in the week hours. Now I had Colina and her friends to keep me company. I worked away on the story often late at night, during the witching hour. There are four books in the Dark Ritual series.  I’m still sick with CF, but every year I get a little bit better. And one day I hope to have a full recovery.

Awakening was recently ranked at # 3 in teen horror.  What was running through your mind when you saw how high it had reached?

It was amazeballs! I was so excited to see it reach #3 on Amazon teen horror. The best part was knowing more people would be reading about Colina’s adventures.

There are four books in the Dark Rituals Series.  Which one is your favorite and why?

I love Possession book 2. It was my favorite until I wrote Legion book 4. Now I have to say I love book four the best. I love all the fight scenes. I love seeing Colina come into her powers.

Can you tell us a little about the process you had to go through to get the Dark Rituals books published?

After Awakening won Best Suspense story in the Wattpad writing contest in 2014, I got contacted by Full Fathom Five publishing. They saw the story and were interested in acquiring the whole series.

Writing is a draining process at the best of times.  I understand that you suffer from Chronic Fatigue Syndrome.  How do you manage to juggle writing, promoting your published work as well as have a life?

I don’t have a life. LOL, It took me two years to write all four books in the dark rituals series. And most of this year has been spent working on the publisher edits for them. As we speak, I’m working away on the edits for book four. With CF, I have to take a lot of breaks in between doing things. I try not to worry about what I can’t get done and just try to get as much done as I can ever day. Sometimes it’s hard especially the month a book comes out, and you have to spend a great deal of time promoting it. There are days the fatigue is so bad I can’t get any work done. On those days, I try to rest and not stress about all the things I should be doing.

What was one of the most surprising things you learned in creating your stories/books?

That writing is a lot of hard work. I always thought that writers wrote only on days they were inspired. When you start working on your first book, you realize that you have to write on days when you don’t feel like writing at all. There are times when you are in the middle of working on a book and you wonder—can I do this? Can I really get this book done? Those are times when you just have to get stubborn and decided you are going to work and keep working until the book is done. And then when it’s done you realize that’s only half the process. Now you have to edit and polish the whole thing. Did I mention writing is hard? 😉

Is there a message in your novels that you want readers to grasp?

Yes, there is. No matter how dark your life gets, never give up. Always keep fighting. Always keep surviving. It’s what I admire most about Colina. She never gives up.

What are your plans after Legion has been published?

Can you tell us about your most memorable moment on Wattpad?

Being one of ten winners in the Wattpad Prize contest in 2104. I’ve never won a writing contest before. It was so amazing. I remember when I found out I danced around the house. 😉

Catrina, thank you for your time today. I know you are very busy and I appreciate you taking time out of your busy day.

Catrina AKA Chaoscat
(Chaos – It’s not just a lifestyle, it’s a state of mind)
Writing YA Paranormal/Horror as Catrina Burgess
The Dark Ritual series -http://fullfathomfive.com/writers/catrina-burgess/the-dark-rituals/
The series has over 3 Million Reads on Wattpad/ Awakening voted Wattpad Best Suspense 2014