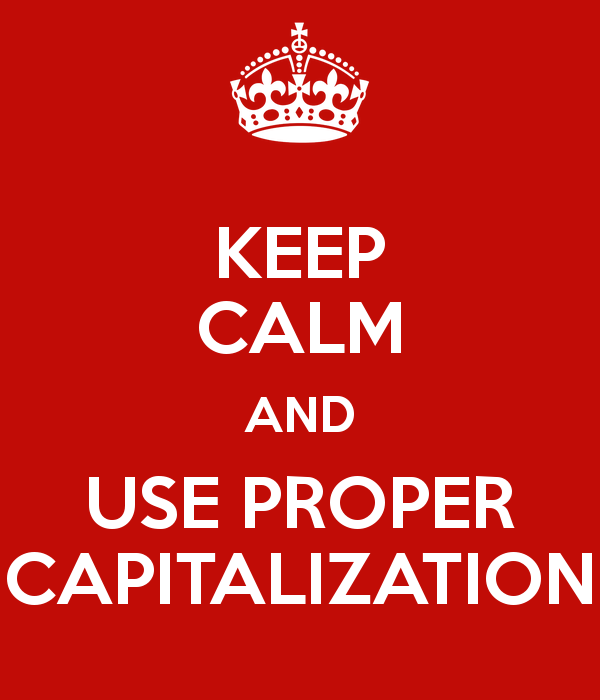 Most of the things we capitalize in English are what we call proper nouns. They are the names of specific, unique things.

This one may seem obvious, but there’s also a catch. Of course, you capitalize the first letters of a person’s first, middle and last names (John Quincy Adams), but you also capitalize suffixes (Jr., the Great, Princess of Power, etc.) and titles.

Titles can be as simple as Mr., Mrs. or Dr., but they also apply to situations wherein you address a person by his or her position as though it’s their first name. For example, when we talk about President Lincoln, we are using his role as though it were a part of his name. We don’t always capitalize the word president. Indeed, we could say, “During the Civil War, President Lincoln was the president of the United States.”

Again, we’re talking about specific places. The word ‘hill’ is not a proper noun, but Gellert Hill is because it’s the name of one specific hill. Use a capital letter to begin each word in the name of a mountain (Mt. Olympus), mountain range (the Appalachians), hill (San Juan Hill) or volcano (Mt. Vesuvius).

From here, it gets pretty easy. The same rules that apply to mountain names also apply to water names. A river is just a river, but the Mississippi River is a proper noun and must be capitalized, just like Lake Erie, the Indian Ocean and the Dead Sea.

Man-made structures also often have names. The White House, the Eiffel Tower, the Statue of Liberty, the Golden Gate Bridge and the Lincoln Tunnel are a few good examples.

All of the words in the name of the educational institution should be capitalized. For example, Harvard University, Wilkesboro Elementary School, Cape Fear Community College.

As is the case with regions of a country, the divisions may not always be political, but you get the idea. When you refer to New England, the Midwest, the Pacific Northwest or the South as a region (as opposed to a compass direction), you capitalize it. Also, continents (South America), countries (Belgium), states (Wisconsin), counties (Prince William County), cities (London) and towns (Lizard Lick) get capitalized.

This one’s a little tricky when ‘and,’ articles or prepositions are involved. If ‘the’ is the first word in the given name of a work, it must be capitalized (The Washington Post, The Glass Menagerie). If ‘a’ or ‘an’ is the first word, it too is capitalized (A Few Good Men), and if a preposition leads the way, you guessed it: Capitalized (Of Mice and Men). However, if any of these words come in the middle of the title, it is not capitalized.

9. The first letter in a sentence

It’s only necessary to capitalize other pronouns when they begin a sentence, but ‘I’ is always capitalized.